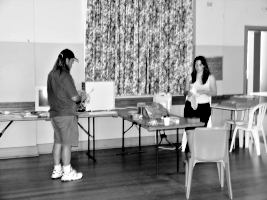 On September the 16th 2006, I was fourtunate enough to be a part of a group of open source enthusiasts that held an event to celebrate Software Freedom Day. This event was plagued by problems. The planned venue withdrew, restricting advertising options until a new venue was found in the week before the event, a lack of lead time impacted on the planning phase, committed resources became unavailable, and equipment not functioning correctly on the day to name a few.

Regardless of these issues, the group persevered and Launceston's Software Freedom Day 2006 event was held at the Windmill Hill Hall and ran from 10:00am to 2:30pm. A local radio station that was covering a Software Freedom Day event in Hobart made mention of the Launceston event, which attracted some 20 to 30 people, almost all of whom took away a CD full of free software and stated that they would be interested in attending a similar event in the near future.

From that response, considering that the only media coverage we had was a brief mention on a radio program, the group came together again to hold a follow up event early in 2007 which would be called Free Software For All. This event was planned to be much bigger and allow open source games and open source operating systems to play a more prominent role than before, with a dedicated Operating Systems area and a planned tournament with prizes for the Games area. 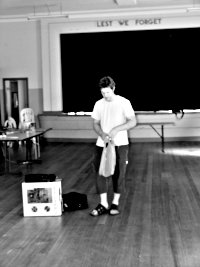 Some last minute issues caused a late arrival on Sunday that in turn lead to our not being quite ready for the mad influx of visitors who had heard our event mentioned on the Saturday morning radio programme which had covered our previous event. Within the first half hour, we had more visitors through the door than our Software Freedom Day event had had in total.

A technical failure and the loss of a machine due to unforeseen pressures caused the games tournament to be more or less abandoned and replaced with a less structured and more open "sit down and play" approach, which allowed the area to become much more accessible in a non-competitive way.

Unexpected sickness in a team member caused us to be undermanned on the day, which led us to combine Home Productivity and Business Productivity into a single area (and is the main reason that we weren't able to get any photos until it quietened down). In the rush to pack up equipment for the event, our machine set up to showcase an example open source Point Of Sale (POS) set up with a functional barcode scanner was left behind and another machine was picked up in its place. This combined with a missing extension cord left our newly merged Productivity area more talk-oriented than example-oriented, something that Henry was able to take avantage of and allow the area to remain positive and informative. 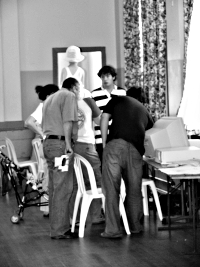 Our new Operating Systems area, which covered a range of open source operating systems, ranging from Linux distributions to BSD derivatives attracted a large number of people interested in looking at the options available to them and having a hands-on try at what open source window managers have to offer. Bob and Josh H gave away over 70 CDs in this area alone, and demonstrated how valuable an area Operating Systems could be.

Waide, who was looking after the Media area, gave up his post to talk to people at the beginning of the day when things were still being unpacked. Waide's enthusiasm for and understanding of open source allowed him to fill in the blank monitors and projector screens with descriptions of the software that would be shown and the advantages that could be gained by using them while the rest of us were plugging in keyboards and mice or fumbling with tangled power cords. Once the Media area had been set up, Creative Commons music and video filled the hall, 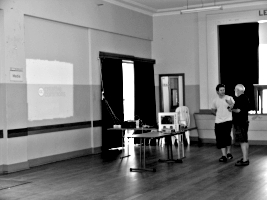 and though Waide's projector was commandeered for other uses once or twice, visitors were able to understand and appreciate what open source software can provide in the way of home theatre and audio/visual playback.

Although things quietened off towards the end of the day, our personal estimates, combined with the number of CDs given away and survey forms filled out, pointed towards the day being a very popular one with some very positive outcomes. We got to meet and talk to a lot of interesting people, and in return share some of our experiences and knowledge of open source software.

We will be updating the web site to contain a list of the software displayed at Free Software For All 2007, as well as some of the survey results. September the 16th will be Software Freedom Day again, and while nothing has been decided, I believe that there will be another event in Launceston to celebrate it.

Aside from that, depending upon demand and interest, there could also be the possibility of further activities such as perhaps a discussion group or a learning session on a particular piece of open source software, so if you feel that you would be interested in seeing something happening before September, please contact us and let us know what you feel Launceston could benefit from.

Additionally, we would like to thank everybody who offered donations at the event. It was a completely unexpected gesture, but one that is very much appreciated.